Both offer a ton of value for the money, and take a unique approach to the “integrated bracelet sport watch” design language.

There are a lot of “children” to come out of the ‘Gerald Genta School of Watch Design. The Patek Philippe Nautilus and the Audemars Piguet Royal Oak are most famous, being Genta’s own, while others take inspiration. Such is the case with the two offerings up for comparison today: the Bulgari Octo Finissimo in Titanium, and the Chopard Alpine Eagle. Both offer a ton of value for the money, and take a unique approach to the “integrated bracelet sport watch” design language. 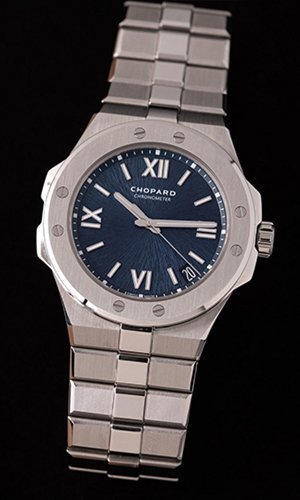 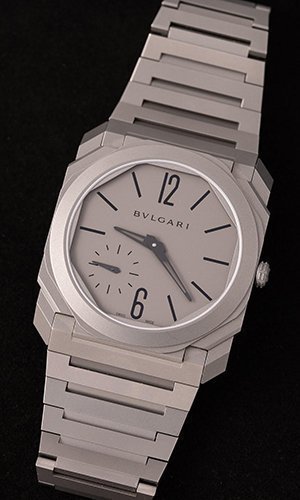 On a design level, both watches have a similar set of aesthetics. Both play with the polygonal Genta-inspired case shape, but each tackles this in different ways. The Chopard chooses a more traditionally Genta approach, with a case shape that very directly harkens back to the classic winged porthole appearance of watches like the Nautilus. The Bulgari, by contrast, sticks to a more square design, though the edges and corners of that square shape are complex and, frankly, beautiful to behold. Of course the truly impressive thing about the Bulgari’s case isn’t its shape, but its thickness…or rather, thinness. At just 5.15mm in height, it wears incredibly well for a watch that is, head on, a 40mm wide square.

The thinness does, however, cause a bit of an issue when it comes to robustness, or at least water resistance. At only 30 meters water resistant, the Octo Finissimo Titanium is basically splash proof, a bit disappointing given its otherwise sporty character. By contrast, the Chopard is rated to 100 meters water resistant, making it suitable for a bit sportier a range of activities (though swimming is up to the wearer’s discretion). 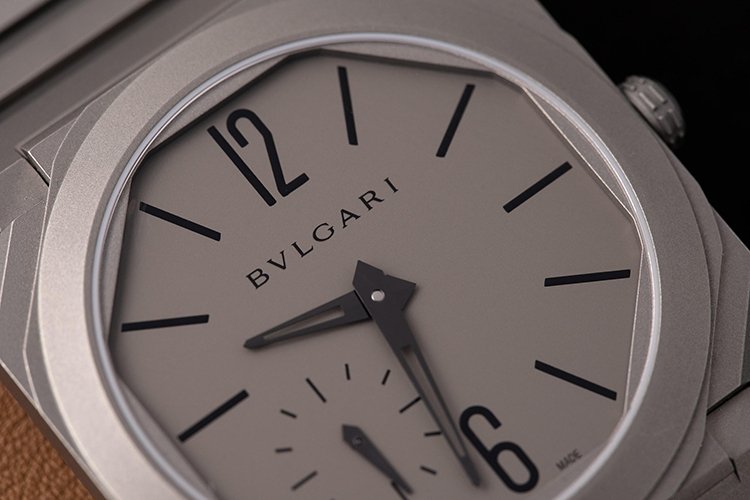 The dials on both watches are stunning, too. Though simple, the Bulgari dial is made of titanium, to match the case and render the watch even lighter on the wrist than a steel or aluminum dial might otherwise (though, it was never going to be a very heavy watch to begin with). There’s a sub-seconds dial at approximately 7-8 o’clock on the dial as well, giving it a bit of wabi-sabi that its otherwise pretty plain execution might have lacked. The Chopard dial is perhaps the watch’s main selling point, with a unique blue radiant effect (grey is also an option) meant to resemble the iris of an eagle that shimmers in any lighting. At 4:30, we have a date window that does stick out a bit, but being color-matched with the dial, it blends more seamlessly than it would, were it a white disk with dark numbers. 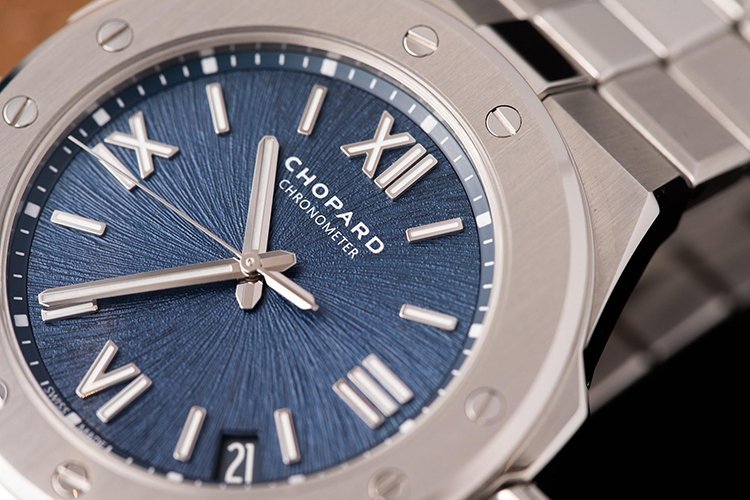 The bracelets are another peak example of Genta’s original concept (the integrated bracelet sport watch) and giving it their own unique spin. The Bulgari bracelet is wide, about as wide as the case where it joins, and tapers a bit from there, but it’s still pretty massive compared to the 20-22mm bracelets we’re used to seeing on watches. It’s executed in titanium to match the case, and features a design that is best described as a squished letter Y. The Chopard bracelet, on the other hand, is a bit more intricate at first look. Made from the same proprietary Lucent steel as the case, it features what appears to be a standard three-link design, but thinned out a bit, with polished center sections. It’s a comfortable bracelet in every way, and adds extra uniqueness to the Alpine Eagle.

Both the Chopard and Bulgari feature in-house movements, but the two calibers couldn’t be more different in execution. In order to maintain the watch’s thin profile, Bulgari opted for a micro-rotor movement, the Caliber BVL 138 Finissimo. Still automatic, the movement is just 2.35mm thick and still manages a 60-hour power reserve. In the Chopard, we have the Caliber 01.01-C, another automatic movement with a power reserve of 60 hours. When it comes to the level of craftsmanship involved, it’s hard to argue with an in-house micro-rotor movement that is under 3mm thick.

The Damage
The Chopard retails for $12,900, while the Bulgari retails for $14,300, and for the extra $2k, you’re getting arguably a more original design, and a higher level of technological innovation in the movement, though Chopard’s proprietary steel alloy does make a strong case for itself all the same..

Conclusion
While neither is cheap, both watches, by playing in a similar price bracket, offer something different for their money that, ultimately, renders the choice between them a very personal one. Questions of case metal, size, and thinness/thickness come into the picture in a more direct way than many other comparisons between pieces might, and the end result is a decision that, in my estimation, is best made after seeing both of these pieces in the metal.