Launched in 2005, the Horological Machine family has been the bedrock of the MB&F brand identity. Each model follows the same basic formula, or lack thereof. Simply, to tell the time in the most unique and visually interesting way possible. Each new iteration is a new invention entirely, although certain models (HM9 included) certainly do take cues from others in the family.

Specs
The funky case of the HM9 is crafted from titanium, which enables the case’s unique shape (which measures at 57mm x 47mm x 23mm) to wear much easier than you might first expect. According to MB&F themselves, the case is designed with elements of mid-century automotive and aviation design as the primary inspirations, including the sleek, sensuous lines of mid-century aircraft, and the rounded, instrument layout of clocks from 20th century cars. 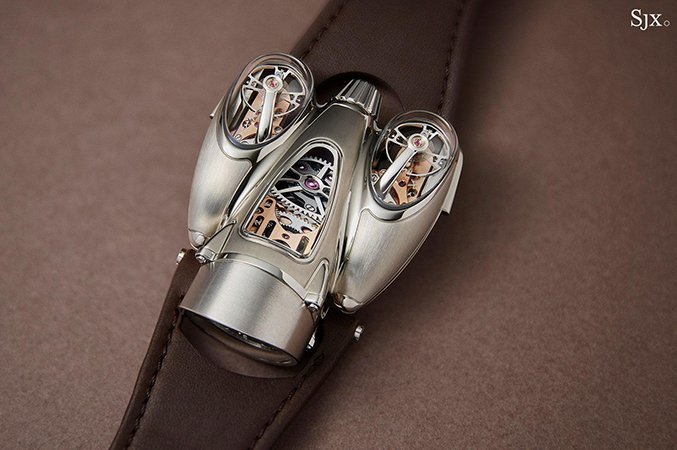 The timepiece features approximately five sapphire crystals, all positioned to demonstrate specific parts of the movement or the actual time display. That time display can be seen on the portion of the watch that would traditionally be the space between the lugs. The reason for this stems back to the piece’s original inspiration – driving watches. The idea, in short, is that by positioning the time display in that location, it becomes readable for a driver without them needing to take their hands off the wheel to turn their wrists and check the time. While generally unnecessary in the 21st century, it’s a throwback not only to a time gone by, but to other, older MB&F pieces. The timepiece is powered by an in-house manual winding caliber, custom designed to fit the shape of the case. It features 44 jewels, a 45 hour power reserve, and beats away at 2.5 Hz.

Pictured above, we have the HM4, one of the clear MB&F in-house design inspirations for the new HM9. There are also elements taken from the Legacy Machine 2, the timepiece that introduced their dual balance wheel movement design (taken here and divided between two separate sections of the piece). There are even some elements of the globe-like surfaces from the HM6.

Logan’s Take
I’ve always had a kind of strange affinity for MB&F. They were never a brand that I sought to own, and indeed I still don’t, but they have always offered such a unique take on the kind of thing I’ve always loved about horology – finding uniquely beautiful ways to tell the time. This watch, with it’s simultaneously space-age and vintage design encompasses all of that and then some. That’s the thing about MB&F – you don’t buy them for what they are as functional timekeepers, though they do that job magnificently. If you did, then a Tudor Pelagos on a strap would be just as, if not more, functional. People buy an MB&F because of that design and the masterpiece movements inside that give them life. Max and his team don’t seem terribly concerned with convention, but rather taking the most basic ideas in watchmaking (in this case, a titanium watch on a brown leather strap) and elevating them beyond the point where they ultimately need to be in order to just be functional, pushing every limit they can in the process – limits of design, limits of construction, limits of mechanics, and I would even argue the limits of our understanding of horology at large. Not too shabby.

MORE FROM THIS SERIES

Introducing the Grand Seiko ‘Nature of Time’ Exhibit and New GMT ‘Toge’ Special Edition
July 17, 2020 | READ
Grand Seiko opened an exhibit in Soho, New York City to display its core tenets in an immersive and visually stimulating way to all watch enthusiasts in the area.

Chopard Alpine Eagle vs BVLGARI Octo Finissimo Titanium
July 15, 2020 | READ
Both offer a ton of value for the money, and take a unique approach to the “integrated bracelet sport watch” design language. 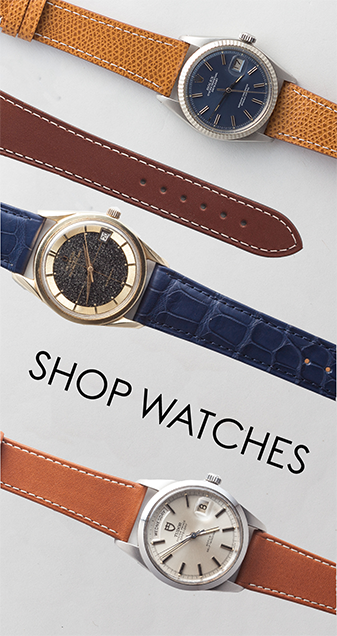