Hands-On with the Yema NavyGraf

The Yema NavyGraf demonstrates the brand’s design skill, heritage, and watchmaking chops and is something truly special.

Watchmaking runs deep in French history, although it may not be the first country that comes to mind when discussing horology, including brands like Cartier, Bell & Ross, and Baltic. One of the brands that doesn’t get quite enough attention is Yema, which has a storied history of its own. One of the brand’s recent releases, the NavyGraf, demonstrates the brand’s design skill, heritage, and watchmaking chops.

But First…
The brand was founded in 1948 by Henry Louis Belmont, a top of his class graduate of the National Watchmaking School of Besancon. In 1963, the brand launched its Superman model, an icon even today. Its 300 meter water resistance and iconic bezel lock system made it a serious dive watch contender, and was interestingly chosen by the French Air Force to equip their pilots. Why it went to their pilots, instead of their Navy, I can’t exactly be sure, though it may have something to do with Tudor supplying divers to the Navy in the ‘60s and early ‘70s. Then, in 1982, the brand’s Spationaute 1 was worn on the wrist of French astronaut Jean-Loup Chretien, making it the first French watch worn in space.

With a history of accolades like those, it’s hard to fathom just why Yema isn’t more well-known in the modern era. This could have something to do with timing, or perhaps some missed PR opportunities in the past, but whatever the reason, they’re making up for lost time now, and if the NavyGraf is any indication, they won’t be slowing down any time soon. 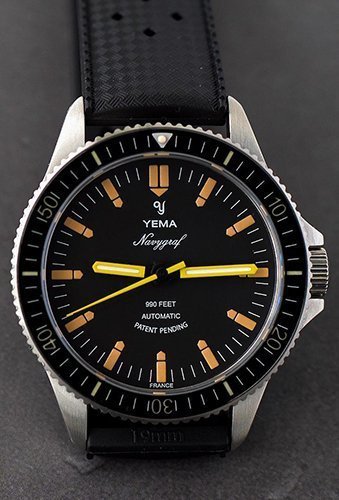 The case of the Yema NavyGraf is 39mm in diameter, a veritable sweet spot in terms of sport watch case sizes and universally wearable. It features a set of pointed, but flattened at the tip, crownguards. In addition to avoiding the unintentional winding, these crown guards offer protection to the crown from any damage that might be sustained from an unwanted bump. It’s a common practice in the modern watch realm, but not one seen quite as often on vintage-inspired diver/sport watches like the NavyGraf. Typically, crown guard-less designs are seen in that genre because watches of the time didn’t feature them as readily, but given their added function, it’s nice to see here.

Moving inboard, we have the bezel of the watch, a unidirectional dive time bezel that features full graduation, similar to that seen on the Rolex Milsub or the original Omega Seamaster 300 models. What helps set this bezel apart is its construction — instead of aluminum, or even ceramic, we have a sapphire bezel insert. Not only does this mirror the look of the original ‘60s bakelite and acrylic bezels, but it does so in a way that manages to secure a high degree of scratch resistance (since the only thing that can scratch sapphire crystal is a diamond). 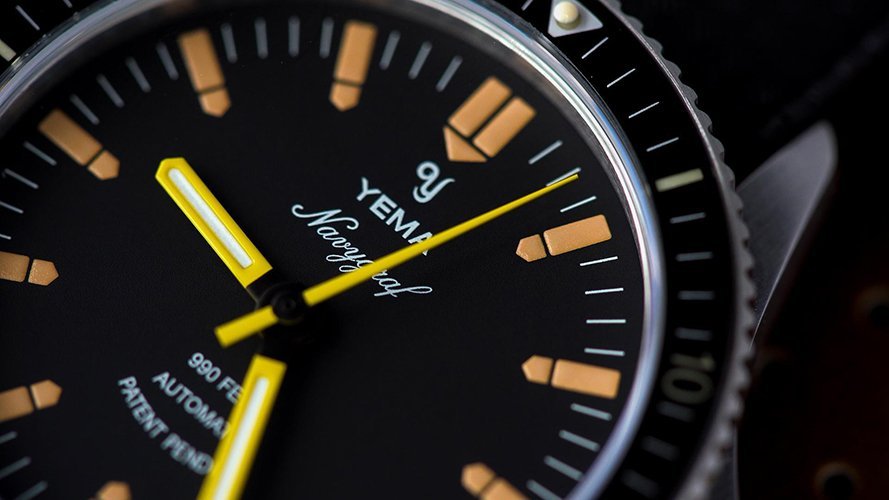 When it comes to the dial of the watch, we have a fairly clean overall aesthetic. An outer white minute track features what the brand calls “vintage orange” hour indices embedded every five minutes, in their signature exclamation point shape. Moving further in, we have a set of hands at center that are sure to grab much of the attention for their vibrant yellow hue. Likely, the reason for this has to do with colors on the orange/yellow spectrum being the easiest to see under dark, murky water conditions, further accentuating the watch’s intended purpose as a tool/diver. All of the hands and markers are treated with Superluminova C5. Interestingly, the water resistance is solely written in feet on the dial, rather than the more standard “Feet/Meters” format seen on most divers.

The movement powering the NavyGraf is where things really start to get special, though. Here we have Yema’s in-house caliber MBP1000. Yes, you read correctly — an in-house automatic movement for under $1,000 from a brand that isn’t Seiko or Orient. The MBP1000 began design in 2009, and was formally unveiled in 2011. It features a 45-hour power reserve, and beats at a respectable 28,800 bpm, or 4 Hz. The movement is rated to +/- 6 seconds per day observed accuracy, with a minimum accuracy of +/- 12 seconds per day. You can read more about its construction and development here. 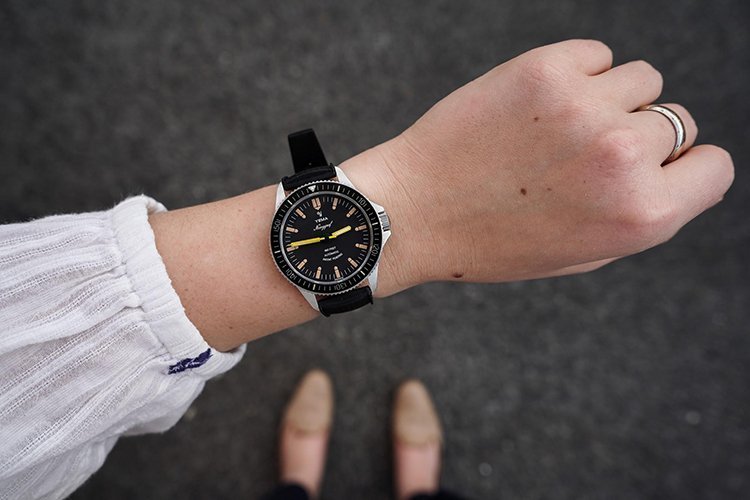 The Take
Overall, what Yema has crafted here is something truly special. It’s vintage inspired without feeling cheesy, paying tribute to their unique design language and way of making watches. It features an in-house French caliber, something frankly unheard of sub-$1k from really any brand. And, perhaps best of all, it’s a fully functional tool watch that looks just as good out of the pool as it does ten feet deep.