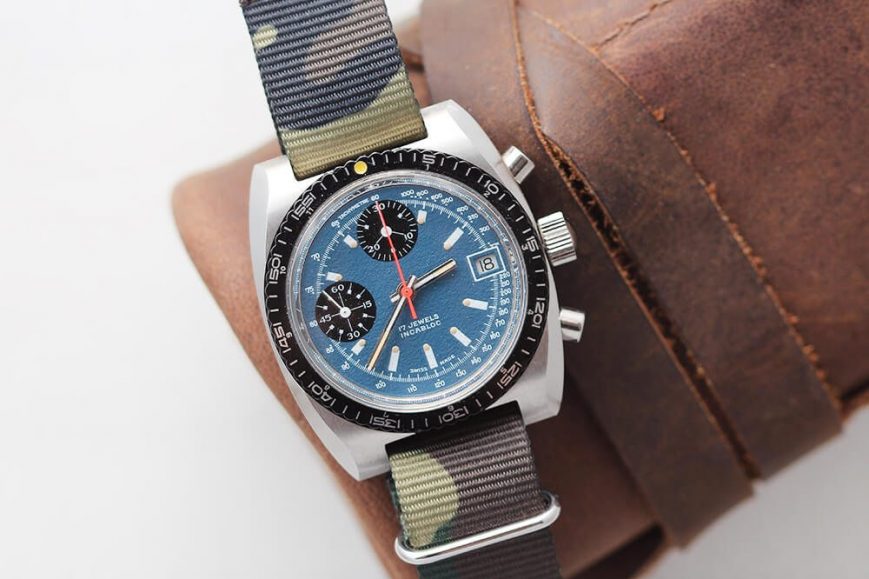 This is an enormous deal. Before I jump into exactly what we have here, we'll have a little history lesson. The “Paul Newman” dialed Rolex Daytona's, introduced throughout the early 60's with retail prices around $300, skyrocketed in value the early 2000's upwards of $80-$200K. Why? Because of a font – can you believe it? It's true, a little change in the font filling the chronograph sub-dials became a phenomenon that has absolutely swept the watch world. Now, the dials (made famous by Rolex) that feature this funky exotic font are both insanely (understatement) rare and extremely valuable. Moving on to this example – powered by the Valjoux 7765 manually would caliber, it wasn't made before or even during the production of the “Paul Newman” Daytona's but rather in the sweet spot after the production and before their explosion of popularity. Lets dive a little deeper into the watch – its dial is totally original with beautiful custard lume on the hour markers which matching the hands wonderfully. It's case is totally untouched, I'd even go so far as to call it a safe queen – a watch that rarely reached the wrist. I don't know who made this watch, why they did or where they sold it but what I do know is this: it's an amazing opportunity to own one of the singularly most important design elements in the history of watch collecting and for that, I don't really understand why we're letting it go.