With this launch, the brand seems to be reclaiming their rightful seat at the racing table.

Heuer and racing have a long, rich history together, replete with historic appearances in film and on the wrists of motorists. However, the association between the two entities has weakened since the days of Steve McQueen.

But First, The Monaco 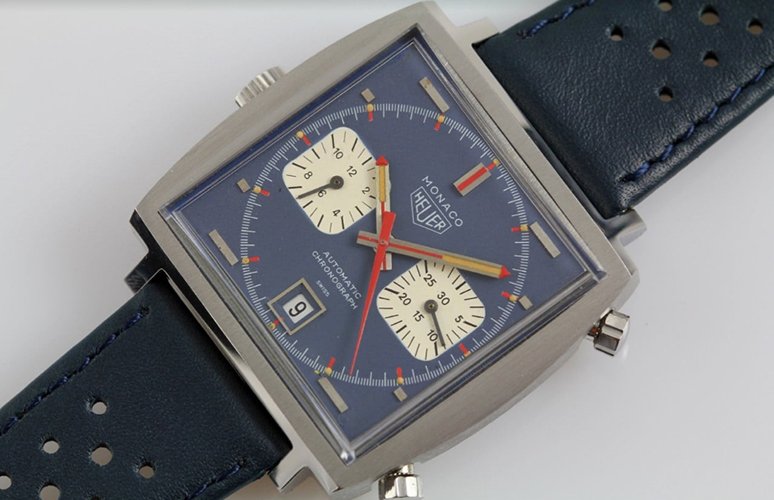 Launched in 1969, Heuer’s Monaco was born in the race to develop the market’s first self-winding chronograph. This watch, a piece originally intended for architects and designers rather than racers, even featured the crown on the left-hand side to remind the wearer that it didn’t need to be wound in order to run.

In 1971, Steve McQueen wore a Monaco with a blue dial in his film Le Mans, cementing the watch as a part of cinematic, racing and horological history. Despite this feature, the watch was far from an overnight success, only lasting in Heuer’s lineup for a few years before being discontinued. But when the Monaco was reissued in 1997, it became a massive hit for the brand. Since then, there have been countless variations, from time-only quartz models to tourbillons.

The Monaco x Monaco Grand Prix de Historique is the newest addition to the Monaco family. It’s a limited edition watch that stands apart from the rest of the range and strengthens the brand’s connection to the Monaco racing culture.

This marks the third Monaco race for which Heuer serves as official timekeeper, (the other two, for the record, are the Monaco Formula 1 Grand Prix and the Monaco Top Cars Collection).

The case is classic Monaco. It measures 39mm x 39mm in diameter, still finished to the Monaco standard, with alternating brushed and polished surfaces. The lugs are short, barely extending the case’s 39mm length which makes for a supremely wearable, albeit different, wrist experience. 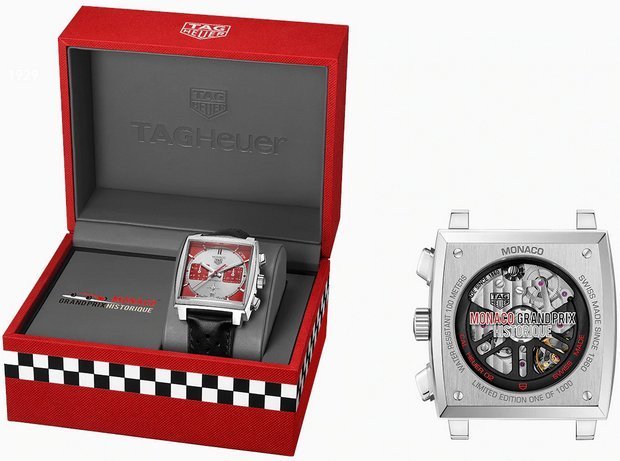 Where things start to get really different for the watch is the dial. Its layout is the same, but it introduces a serious pop of color with the red dial, rather than the traditional blue. It’s a balanced aesthetic, and is one of the many reasons the Monaco is so well loved in the first place. The subdials at 3 and 9 o’clock are red, to contrast against the white portion of the dial, and help make it easier to read in most lighting conditions. There’s a date window at 6 o’clock, which sits just below the constant seconds indicator, one of the few functional differences between this Monaco and the McQueen icon.

Powering the watch is the in-house Heuer Calibre 02, a column wheel, vertical clutch chronograph movement with an 80 hour power reserve. It is visible through the sapphire caseback with the Monaco Grand Prix de Historique logo printed over it. Also on the caseback will be “One of 1000,” the number to which the line is limited.

The Take
While its historic racing models like the Carerra, Autavia and Monaco still define its catalogue, Tag Heuer has lost much of the association they forged in their golden era with sport and racing. In opting for marketing campaigns powered by a suited up Leonardo DiCaprio, as opposed to regular involvement in racing on and off screen, the brand neglected one of their most proud claims to culture.

A brand like Omega, on the other hand, works endlessly to keep its connection to sport and action; from partnering as the official timekeeper of the Olympics to its ongoing relationship with the world’s greatest superspy, James Bond.

Would I have preferred something more unique and developmentally interesting/complicated than a dial color change? Yes. A red ceramic case, maybe paired with a charcoal dial, would have shown how serious the brand is about rededicating themselves to the sport.

However, it’s partnerships like this that suggest Heuer is working to reconnect the two worlds, to reestablish their heritage and recapture the attention of the watch market.